On Friday June 23rd at 7.00pm,we have a brand new musical for Northumberland – its people and their stories

When the city meets the Northumberland countryside, all is not what it seems… what is the news ‘Beyond the End of the Road’?

A brand new musical about Northumberland is touring the rural roads of the border county with a show for and about its people. The residents of Shilbottle will be both audiences and participants in the show when it comes to the village on Friday June 23rd.

Beyond the End of the Road is performed by a cast of 10 professional actor/musicians to live music inspired by local folk and traditional Northumbrian music. The show also features guest performances from local talent, a community choir and local musicians who will join the end-of-show Ceilidh which will be compared by internationally recognized concertina player and Northumbrian piper, Alistair Anderson.

The musical is set in a small, imaginary village called P L A C E where the cast weave their midsummer tale about its residents, their loves, their losses and their deepest secrets. The idea for the show originated from musician Katie Doherty’s move from the city to a hill farm near Blanchland and has been further inspired by the stories, characters and anecdotes from each of the villages it is touring to.

November Club, the award-winning, Morpeth based performing arts company, has travelled the county from Norham in the North to Bardon Mill in the west, working with village communities to farm the ideas for the show, making it for and about communities like Shilbottle.

The residents of Shilbottle have been heavily involved in the musical from the initial story gathering sessions to drama workshops to find aspiring actors. Families have taken part in a ‘make-and-do’ day to help make bunting to decorate the hall on performance night and the Shilbottle WI will be baking a cake to be shared in the interval.

Cinzia Hardy, Artistic Director at November Club said: “This is the only musical to be made based on rural life in Northumberland and it’s something to be celebrated. We have been able to build on our unique approach to working with local communities – reaching new places and people across Northumberland. The content will be shaped by each village and it will be a real discovery of the county.”

Beyond the End of the Road is produced by November Club in collaboration with Highlights Rural Touring Scheme and will be touring across Northumberland throughout June. Shilbottle Community Hall is one of 10 venues to host this rural, road-show musical which opens at Hexham livestock Auction Mart on 2nd June and ends on Holy Island on 1st July. The tour includes village halls in Norham, Felton, Shilbottle and Bardon Mill & Henshaw  – who are all existing partners of Highlights Rural Touring Scheme – and in Kirknewton, Thropton and Whalton village halls as well as a performance at Sage Gateshead.

Beyond the End of the Road: 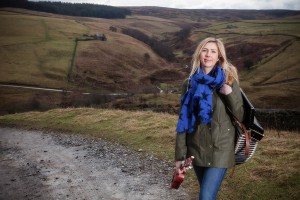 Music and Lyrics by Katie Doherty

Presented by the November Club.

Highlights work in partnership with a network of village halls and community venues across Cumbria, Northumberland and Durham to provide professional performances from national touring companies and an annual contemporary craft tour each autumn. The scheme currently supports promoters in 20+ village halls across Northumberland from Haltwhistle to Spittal and a further 50+ rural venues across Cumbria and Durham including the districts of South Lakes, Eden, rural Carlisle, Teesdale and Wear Valley. Highlights is part of a national network of over 30 rural touring schemes, under the umbrella of the National Rural Touring Forum.  Highlights’ promoters are mostly voluntary and work hard to bring quality performances to the heart of their village for the enjoyment of their communities. Highlights is an NPO client of Arts Council England and is supported by Cumbria, Durham and Northumberland County Councils, the District Councils of Eden and South Lakeland, The National Rural Touring Forum as well as other partners and arts providers. More information at www.highlightsnorth.co.uk

November Club is a Morpeth based, performing arts company. We make site-specific productions that explore the stories of the local communities with whom we work. We work indoors and outdoors in all sorts of places to weave together historical and contemporary themes. Participation is central to what we do. We invite our audiences to share their experiences, heritage and creativity, to take extraordinary journeys into unexpected places. www.novemberclub.org.uk